Send me an email when you restock knives!

Debora with Guayacan and Guayubira Handle

Debora is Ramo Filos' take on the Japanese Deba knife which is typically used to clean and fillet fish and chicken. Debora is designed to be more versatile and multifunctional than its Japanese counterpart and is one of Ramo's founding members' most used blades. Made in Buenos Aires, Argentina.

Guayacan is a hardwood native to the northern coast of South America. It is characterized by its strength, toughness, and density.

Guayubira is a moderately hard, semi-heavy wood native to Paraguay known for its exceptional quality and flexibility.

I'll start and say that the customer service is one of the best I ever seen in my life ! The knife is beautiful made , the handle is beautiful the shipping was super fast...I will absolutely recommend and will continue to get from you guys !

I’m so happy i found this amazing company! As a professional chef I can’t get over the wonderful quality and attention to detail these knives have!

I am a professional chef and have owned several of the top brands of chef knives. While some have been very good, they don’t come close to this knife. The weight,the durability and not to mention the looks make me look forward to chopping veggies and breaking down large cuts of meat. 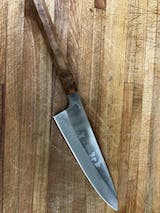